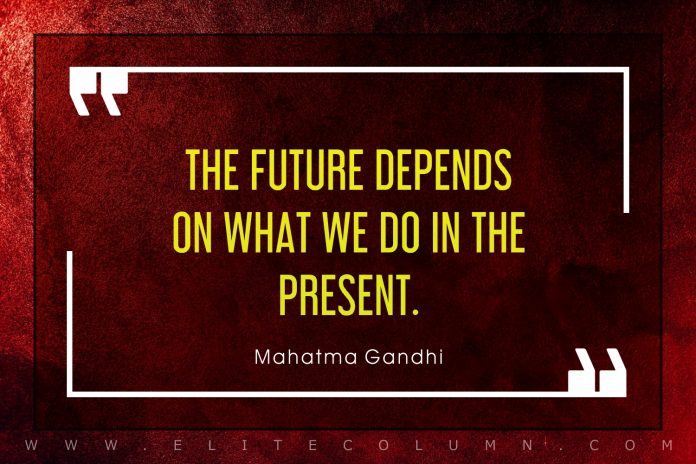 1. “The future belongs to those who believe in the beauty of their dreams.” – Eleanor Roosevelt

2. “Life can only be understood backwards; but it must be lived forwards.” – Soren Kierkegaard

3. “The future depends on what we do in the present.” – Mahatma Gandhi

4. “Even if you fall on your face you’re still moving forward.” – Victor Kiam

5. “No matter how dirty your past is, your future is still spotless.” – Drake

6. “The best thing about the future is that it comes one day at a time.” – Abraham Lincoln

7. “Let the future tell the truth, and evaluate each one according to his work and accomplishments. The present is theirs; the future, for which I have really worked, is mine.” – Nikola Tesla

8. “The only thing we know about the future is that it will be different.” – Peter Drucker

9. “A speculator is a man who observes the future, and acts before it occurs.” – Bernard Baruch

10. “If we open a quarrel between past and present, we shall find that we have lost the future.” – Winston Churchill

11. “Always remember that the future comes one day at a time” – Dean Acheson

12. “If we could unfold the future, the present would be our greatest care.” – Edward Counsel

14. “There is nothing like a dream to create the future.” – Victor Hugo

15. “With clarity, perseverance and grit, anything is possible.” – Avinash VS

18. “What you do today can improve all your tomorrows.” – Ralph Marston

20. “The future is there… looking back at us. Trying to make sense of the fiction we will have become.” – William Gibson

21. “You cannot escape the responsibility of tomorrow by evading it today.” – Abraham Lincoln

22. “We are made wise not by the recollection of our past, but by the responsibility for our future.” – George Bernard Shaw

23. “Even though the future seems far away, it is actually beginning right now.” – Mattie Stepanek

25. “The future is not an inheritance, it is an opportunity and an obligation.” – Bill Clinton

26. “Real generosity toward the future lies in giving all to the present.” – Albert Camus

27. “Humanity does not know where to go because no one is waiting for it: not even God.” – Antonio Porchia

29. “In this bright future you can’t forget your past.” – Bob Marley

31. “I guess short films have a bright future… The advantage is budget.” – Anurag Kashyap

32. “It always seems impossible until it is done.” – Nelson Mandela

34. “The past gave us experience and made us wiser so that we can create a beautiful and brighter future.” – Debasish Mridha

35. “When I started my campaign for Congress, I was one who people said, ‘Tulsi, you have a bright future, but there’s no way you can win.” – Tulsi Gabbard

36. “Being fully present is the best guarantee for a bright future.” – Guy Finley

38. “Do not dwell in the past, do not dream of the future, concentrate the mind on the present moment.” – Buddha

39. “When did the future switch from being a promise to being a threat?” – Chuck Palahniuk

43. “The future was always more important than the past.” – PAUL PARK

44. “I never think of the future. It comes soon enough.” – Albert Einstein

45. “My interest is in the future because I am going to spend the rest of my life there.” – Charles F. Kettering

46. “When all else is lost, the future still remains.” – Christian Nevell Bovee

47. “The future is up for grabs. It belongs to any and all who will take the risk and accept the responsibility of consciously creating the future they want.” – Robert Anton Wilson

48. “Sometimes we have to soak ourselves in the tears and fears of the past to water our future gardens.” – Suzy Kassem

50. “Your future is your own again. And I consider that to be a happy ending to the story.” – Lisa Mangum

52. “The future is in the skies.” – Mustafa Kemal Atatürk

53. “Your future is only as bright as your mind is open.” – Rich Wilkins

54. “Be careful not to look so far ahead, that you miss what’s in front of you.” – Jeremy Aldana

55. “She had no idea what the future would hold for any of them, beyond possibilities as infinite as the stars. And really, that was enough.” – Melissa Landers

56. “You can only take steps toward the future you want. It’s not guaranteed to be there.” – Amanda Howells

57. “This is what you do. You make a future for yourself out of the raw material at hand.” – Michael Cunningham

59. “Our anxiety does not come from thinking about the future, but from wanting to control it.” – Kahlil Gibran

61. “One must plan for the future and anticipate the future without fearing the future.” – Robin Hobb

62. “The direction in which education starts a man will determine his future life.” – Plato

63. “I’m always thinking about creating. My future starts when I wake up in the morning and see the light.” – Miles Davis

64. “At some point the future becomes reality. And then it quickly becomes the past.” – Haruki Murakami

66. “We remember the past, live in the present, and write the future.” – Shaun David Hutchinson

67. “People don’t realize that the future is just now, but later.” – Russell Brand

68. “I am an optimist. Anyone interested in the future has to be otherwise he would simply shoot himself.” – Arthur C. Clarke

69. “The future is a hundred thousand threads, but the past is a fabric that can never be rewoven.” – Orson Scott Card

70. “The most important thing is this: to sacrifice what you are now for what you can become tomorrow.” – Shannon Alder

72. “The future lay before him, inevitable but invisible.” – John Green

74. “The only limit to our realization of tomorrow will be our doubts of today. Let us move forward with strong and active faith.” – Franklin D. Roosevelt

75. “The future will be what it will, and fretting about it will only make your fears more likely to come true.” – Christopher Paolini

Thanks for checking out the best Future Quotes. Feel free to share the quotes with your friends. Leave a comment below and which are your favourite Future Quotes ?