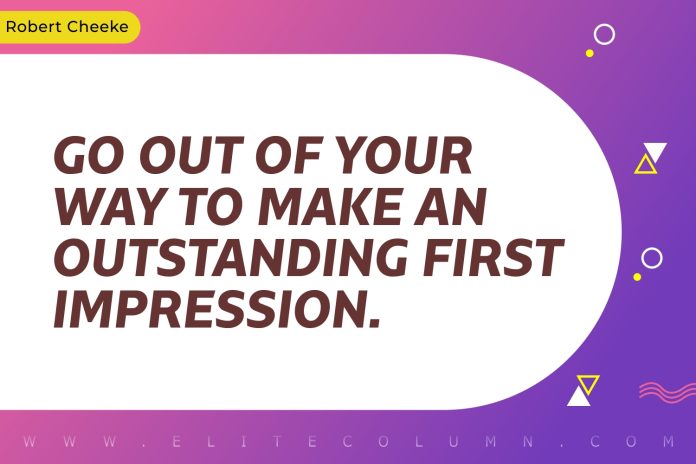 2. “The same principles which at first view lead to skepticism, pursued to a certain point, bring men back to common sense.” – George Berkeley

3. “People sometimes talk about the power of first impressions, and believe me, there is truth to it.” – Ann Brashares

4. “Go out of your way to make an outstanding first impression.” – Robert Cheeke

5. “The first impression of a work of art is its otherness from reality.” – Susanne Katherina Langer

6. “First feelings are always the most natural.” – Louis XIV

8. “We have a bad image in the world, I’ve got to admit. I just want people to think twice about Colombia. Don’t go by the first impression.” – Camilo Villegas

9. “You only have one first chance to make one first impression that lasts a lifetime.” – Nas

12. “You only get one chance to make a good first impression, and yours may be in the hands of the receptionist.” – Harvey Mackay

15. “Each of us is full of too many wheels, screws and valves to permit us to judge one another on a first impression or by two or three external signs.” – Anton Chekhov

16. “The first impression is always the right one. I rarely change my mind upward about people.” – Hunter S. Thompson

17. “Sometimes people can’t see past us to hear our message. We never have a second chance to leave a first impression.” – Charles R. Swindoll

18. “With me it’s always about first impressions.” – Billy Zane

19. “Your initial opinion on just about anything may change over time.” – Daniel Handler

20. “You make a first impression and people never forget it. If people want to think of me as the wacky ‘Juno’ lady forever, I could think of worse ways to be labeled.” – Diablo Cody

21. “It’s important to make a great first impression, so make sure to hold on to your damn weave.” – RuPaul

22. “A stunning first impression was not the same thing as love at first sight. But surely it was an invitation to consider the matter.” – Lois McMaster Bujold

23. “Possibly the most interesting first impression of my life came from the world of dreams.” – P. D. Ouspensky

24. “We don’t know where our first impressions come from or precisely what they mean, so we don’t always appreciate their fragility.” – Malcolm Gladwell

25. “It is only at the first encounter that a face makes its full impression on us.” – Arthur Schopenhauer

26. “What I am after is the first impression – I want to show all one sees on first entering the room – what my eye takes in at first glance.” – Pierre Bonnard

29. “The first impression is the truth, and all that follows is merely the excuse of memory.” – Andrew Crumey

30. “No great thought, no great object, satisfies the mind at first view, nor at the last.” – Abel Stevens

31. “We sometimes encounter people, even perfect strangers, who begin to interest us at first sight, somehow suddenly, all at once, before a word has been spoken.” – Fyodor Dostoyevsky

32. “A firm, hearty handshake gives a good first impression, and you’ll never be forgiven if you don’t live up to it.” – P. J. O’Rourke

34. “You never get a second chance to make a first impression.” – Andrew Grant

35. “Never forget that you only have one opportunity to make a first impression – with investors, with customers, with PR, and with marketing.” – Natalie Massenet

36. “I don’t know if you’ve ever noticed this, but first impressions are often entirely wrong.” – Lemony Snicket

38. “Never lose the first impression which has moved you.” – Jean Baptiste Camille Corot

39. “My first feeling about the paper and the attitude is that it is absurd.” – Arthur Holly Compton

40. “Realize the value of putting down your first impression quickly.” – Charles Webster Hawthorne

41. “I influence anybody who is able to get through the chaos of my first impression.” – Gary Vaynerchuk

44. “Adjust your philosophy of First Impressions – You should know they’re meaningless by now.” – Timothy Correa

47. “How you first meet the public is how the industry sees you. You can’t argue with them. That’s their perception.” – Meryl Streep

48. “From the very first instances of perception, some things are grateful and others unwelcome to us; some things we incline to, and others we fly.” – Locke

49. “To find out your real opinion of someone, judge the impression you have when you first see a letter from them.” – Arthur Schopenhauer