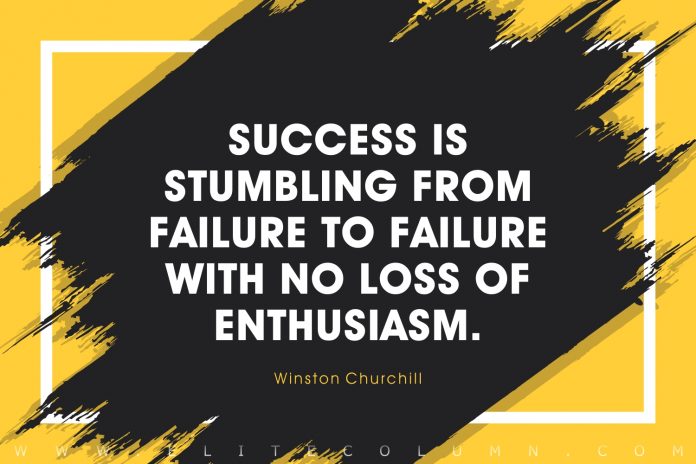 1. “If you don’t try at anything, you can’t fail. It takes back bone to lead the life you want” – Richard Yates

2. “Giving up is the only sure way to fail.” – Gena Showalter

4. “There is no failure except in no longer trying.” – Christ Bradford

5. “It’s failure that gives you the proper perspective on success.” – Ellen DeGeneres

6. “You can always change a situation in your favour if you choose to pause, evaluate, and act.” – Avinash VS

7. “Success is not final, failure is not fatal It is the courage to continue that counts.” – Winston Churchill

8. “Success is stumbling from failure to failure with no loss of enthusiasm.” – Winston Churchill

10. “Failure isn’t fatal, but failure to change might be” – John Wooden

11. “Success is most often achieved by those who don’t know that failure is inevitable.” – Coco Chanel

13. “If you’re not prepared to be wrong, you’ll never come up with anything original.” – Ken Robinson

14. “Only those who dare to fail greatly can ever achieve greatly.” – Robert F. Kennedy

15. “The difference between average people and achieving people is their perception of and response to failure.” – John C. Maxwell

16. “Failure happens all the time. It happens every day in practice. What makes you better how you react to it.” – Mia Hamm

20. “I’d rather be partly greater than entirely useless.” – Neal Shusterman

21. “Failures are finger posts on the road to achievement.” – C.S. Lewis

22. “The only real mistake is the one from which we learn nothing.” – Henry Ford

23. “Every adversity, every failure, every heartache carries with it the seed of an equal or greater benefit.” – Napoleon Hill

24. Our greatest glory is not in never failing, but in rising every time we fail.” – Confucius

25. Just because you fail once doesn’t mean you’re gonna fail at everything.” – Marilyn Monroe

26. Failure is not the opposite of success; it’s part of success.” – Arianna Huffington

27. “Those who dare to fail miserably can achieve greatly.” – John F Kennedy

29. “A failure doesn’t mean you are unworthy, nor does it preclude success on the next try.” – Leonard Mlodinow

30. “Failure is an attitude, not an outcome.” – Harvey MacKay

32. “Winners are not afraid of losing. But losers are. Failure is part of the process of success. People who avoid failure also avoid success.” – Robert T. Kiyosaki

34. “What is the point of being alive if you don’t at least try to do something remarkable?” – John Green

36. You are not a failure and you need to quit telling yourself that you could have avoided failing because no successful person ever avoids the pain in hopes for the gains.” – Anonymous

37. “If you’re not failing every now and again, it’s a sign you’re not doing anything very innovative.” – Woody Allen

38. “Each mistake teaches you something new about yourself. There is no failure, remember, except in no longer trying. It is the courage to continue that counts.” – Christ Bradford

39. “What matters is this: Being fearless of failure arms you to break the rules. In doing so, you may change the culture and just possibly, for a moment, change life itself.” – Malcom Mclaren

41. “Failure is an option whenever you take a leap of faith. In every risk there can be success or a lesson.” – James Cameron

44. “Failure is an important part of your growth. Don’t be afraid to fail.” – Michelle Obama

45. “It’s fine to celebrate success but it is more important to heed the lessons of failure.” – Bill Gates

46. “Failure is the tuition you pay for success” – Walter Brunell

47. “Failure is the key to success; Each mistake teaches us something.” – Morihei Ueshiba

49. “Failure is success if we learn from it.” – Malcolm Forbes

50. “Most so called failures are only temporary defeats.” – Napoleon Hill

Thanks for checking out the best Failure Quotes. Feel free to share the quotes with your friends. Leave a comment below and which are your favourite Failure Quotes ?