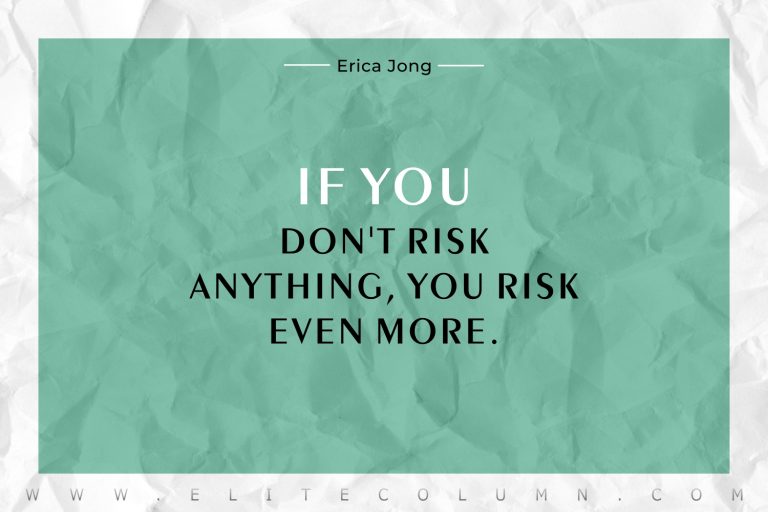 1. “The most difficult thing is the decision to act, the rest is merely tenacity.” – Amelia Earhart

3. “I will not lose, for even in defeat, there’s a valuable lesson learned, so it evens up for me.” – Jay-Z

6. “I think it’s intoxicating when somebody is so unapologetically who they are.” – Don Cheadle

7. “You can never leave footprints that last if you are always walking on tiptoe.” – Leymah Gbowee

8. “If you don’t like the road you’re walking, start paving another one.” – Dolly Parton

9. “If it makes you nervous, you’re doing it right.” – Childish Gambino

10. “What you do makes a difference, and you have to decide what kind of difference you want to make.” – Jane Goodall

12. “In order to be irreplaceable one must always be different.” – Coco Chanel

13. “Anything can make me stop and look and wonder, and sometimes learn.” – Kurt Vonnegut

14. “People’s passion and desire for authenticity is strong.” – Constance Wu

15. “A surplus of effort could overcome a deficit of confidence.” – Sonia Sotomayor

16. “Doubt is a killer. You just have to know who you are and what you stand for.” – Jennifer Lopez

18. “No one changes the world who isn’t obsessed.” – Billie Jean King

19. “I learned a long time ago that there is something worse than missing the goal, and that’s not pulling the trigger.” – Mia Hamm

20. “Some people want it to happen, some wish it would happen, others make it happen.” – Michael Jordan

21. “It is remarkable how much long-term advantage people like us have gotten by trying to be consistently not stupid, instead of trying to be very intelligent.” – Charlie Munger

22. “When I believe in something, I’m like a dog with a bone.” – Melissa McCarthy

23. “And the day came when the risk to remain tight in a bud was more painful than the risk it took to blossom.” – Anaïs Nin

25. “I’ve searched all the parks in all the cities and found no statues of committees.” – Gilbert K. Chesterton

26. “You can get everything in life you want if you will just help enough other people get what they want.” – Zig Ziglar

27. “Inspiration does exist, but it must find you working.” – Pablo Picasso

28. “Don’t settle for average. Bring your best to the moment. Then, whether it fails or succeeds, at least you know you gave all you had.” – Angela Bassett

30. “Don’t bunt. Aim out of the ballpark. Aim for the company of immortals.” – David Ogilvy

32. “If you believe something needs to exist, if it’s something you want to use yourself, don’t let anyone ever stop you from doing it.” – Tobias Lütke

34. “The battles that count aren’t the ones for gold medals. The struggles within yourself—the invisible, inevitable battles inside all of us that’s where it’s at.” – Jesse Owens

37. “Develop success from failures. Discouragement and failure are two of the surest stepping stones to success.” – Dale Carnegie

38. “Relentlessly prune bullshit, don’t wait to do things that matter, and savor the time you have. That’s what you do when life is short.” – Paul Graham

40. “If the highest aim of a captain were to preserve his ship, he would keep it in port forever.” – Thomas Aquinas

41. “You can be the ripest, juiciest peach in the world, and there’s still going to be somebody who hates peaches.” – Dita Von Teese

43. “The only way of discovering the limits of the possible is to venture a little way past them into the impossible.” – Arthur C. Clarke

44. “Courage is the most important of all the virtues because without courage, you can’t practice any other virtue consistently.” – Maya Angelou

46. “The reason we struggle with insecurity is because we compare our behind-the-scenes with everyone else’s highlight reel.” – Steve Furtick

47. “Somewhere, something incredible is waiting to be known.” – Carl Sagan

48. “Don’t worry about failure; you only have to be right once.” – Drew Houston

49. “You carry the passport to your own happiness.” – Diane von Furstenberg

Thanks for checking out the best Daily Quotes. Feel free to share the quotes with your friends. Leave a comment below and which are your favourite Daily Quotes ?