Christopher Poindexter is a poet currently based in Florida. He describes himself as being an ‘observer’ and also says that Jim Morrison is his spirit animal. He owns an Etsy shop from where people can buy his hand-typed poetry and quotes books. Though his own Instagram account doesn’t have much of his own photos, his girlfriend’s account does have a few photos of them together. His book ‘Naked Human’ is currently on pre-order state. One can find his poetry, general musing and some photographs of his girlfriend in Tumblr. Below are 9 of best Christopher Poindexter quotes to make your love a success. 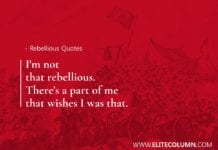 12 Best Rebellious Quotes To Provoke The Inner Beast In You