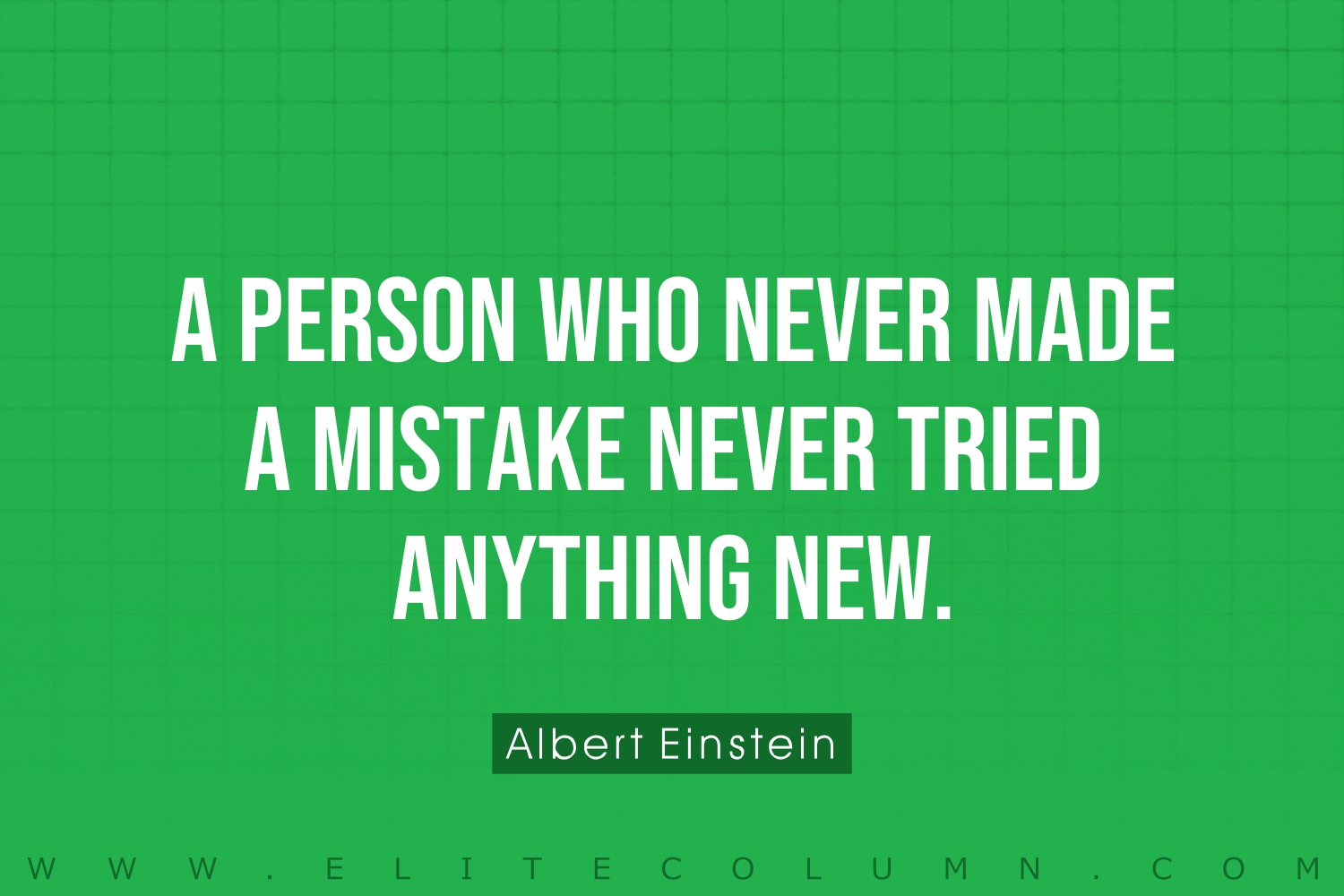 3. “There is only one way to avoid criticism: Do nothing, say nothing, and be nothing.” – Aristotle

4. “If you’re not a risk taker, you should get the hell out of business.” – Ray Kroc

5. “Believe you can and you’re halfway there.” – Theodore Roosevelt

6. “The most difficult thing is the decision to act, the rest is merely tenacity.” – Amelia Earhart

7. “If you live for weekends or vacations, your shit is broken.” – Gary Vaynerchuk

8. “Whenever you see a successful business, someone once made a courageous decision.” – Peter F. Drucker

10. “A person who never made a mistake never tried anything new.” – Albert Einstein

12. “The hardest part about being an entrepreneur is that you’ll fail ten times for every success.” – Adam Horwitz

13. “I’m convinced that about half of what separates the successful entrepreneurs from the non-successful ones is pure perseverance.” – Steve Jobs

14. “It does not matter how slowly you go as long as you do not stop.” – Confucius

16. “You may be disappointed if you fail, but you are doomed if you don’t try.” – Beverly Sills

20. “Think big and don’t listen to people who tell you it can’t be done. Life’s too short to think small.” – Timothy Ferriss

21. “The way to get started is to quit talking and begin doing.” – Walt Disney

24. “Success is not the key to happiness. Happiness is the key to success. If you love what you are doing, you will be successful.” – Albert Schweitzer

25. “Entrepreneurship is neither a science nor an art. It is a practice.” – Peter Drucker

26. “You can never cross the ocean until you have the courage to lose sight of the shore.” – Christopher Columbus

28. “Do not be embarrassed by your failures, learn from them and start again.” – Richard Branson

29. “Success comes down to hard work plus passion, over time. If you work really, really hard over a long period of time, it will pay off.” – Stanley Tang

30. “When everything seems to be going against you, remember that the airplane takes off against the wind, not with it.” – Henry Ford

32. “Logic will get you from A to B. Imagination will take you everywhere.” – Albert Einstein

33. “Success is walking from failure to failure with no loss of enthusiasm.” – Winston Churchill

34. “I don’t know the key to success, but the key to failure is trying to please everybody.” – Bill Cosby

35. “Keep away from people who try to belittle your ambitions. Small people always do that, but the really great make you feel that you, too, can become great.” – Mark Twain

36. “What is not started will never get finished.” – Johann Wolfgang von Goethe

38. “You shouldn’t focus on why you can’t do something, which is what most people do. You should focus on why perhaps you can, and be one of the exceptions.” – Steve Case

39. “A hard thing is done by figuring out how to start.” – Rand Fishkin

46. “Have the end in mind and every day make sure you are working towards it.” – Ryan Allis

47. “If you think education is expensive, try ignorance.” – Derek Bok

48. “Associate yourself with people of good quality, for it is better to be alone than in bad company.” – Booker T

49. “If you are going through hell, keep going.” – Winston Churchill

50. “One day your life will flash before your eyes. Make sure it is worth watching.” – Mooie

51. “I attribute my success to this: I never gave or took any excuse.” – Florence Nightingale

52. “Rarely have I seen a situation where doing less than the other guy is a good strategy.” – Jimmy Spithill

54. “Do what you can, where you are, with what you have.” – Theodore Roosevelt

55. “Everything you’ve ever wanted is on the other side of fear.” – George Addair

56. “If you just work on stuff that you like and you’re passionate about, you don’t have to have a master plan with how things will play out.” – Mark Zuckerberg

59. “Build your own dreams, or someone else will hire you to build theirs.” – Farrah Gray

61. “Everything started as nothing.” – Ben Weissenstein

62. “I think I was very naïve early on, but that also meant I didn’t know what couldn’t be done.” – Matt Mickiewicz

63. “One of the huge mistakes people make is that they try to force an interest on themselves. You don’t choose your passions; your passions choose you.” – Jeff Bezos

Thanks for checking out the best Business Quotes. Feel free to share the quotes with your friends. Leave a comment below and which are your favourite Business Quotes ?