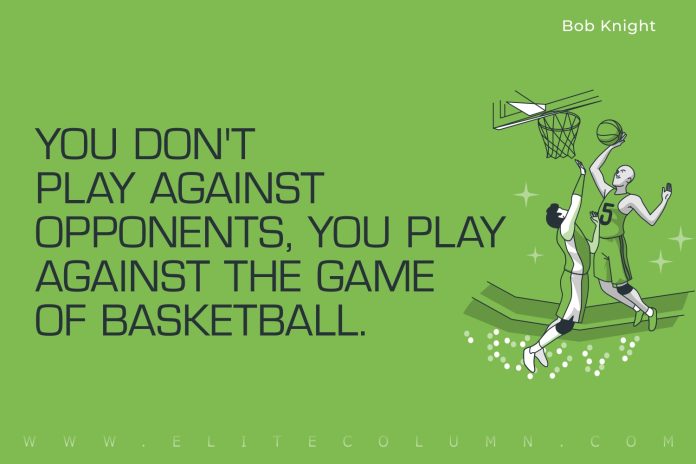 2. “I really get motivated when I have doubters.” – Shaquille O’Neal

6. “Never give up. Failure and rejection are just the first steps to succeeding.” – Jim Valvano

8. “A team will always appreciate a great individual if he’s willing to sacrifice for the group.” – Kareem Abdul Jabbar

9. “The important thing is that your teammates have to know you’re pulling for them and you really want them to be successful.” – Kobe Bryant

10. “Ask not what your teammates can do for you. Ask what you can do for them.” – Magic Johnson

11. “You can’t get much done in life if you only work on the days when you feel good.” – Jerry West

12. “Ask me to steal, block out, sacrifice, lead, dominate, anything. But it’s not what you ask of me it’s what I ask of myself.” – LeBron James

14. “Success is a result of consistent practice of winning skills and actions. There is nothing miraculous about the process. There is no luck involved.” – Bill Russell

15. “The game has its ups and downs, but you can never lose focus of your individual goals and you can’t let yourself be beat because of lack of effort.” – Michael Jordan

16. “The important thing is that your teammates have to know you’re pulling for them and you really want them to be successful.” – Kobe Bryant

18. “I believe you win games by what you do from your first practice until your first game.” – Dr. Jack Ramsay

20. “There are only two options regarding commitment… you’re either in or you’re out. There’s no such thing as life in between.” – Pat Riley

22. “Everybody pulls for David, nobody roots for Goliath.” – Wilt Chamberlain

23. “I think that my God-given physical attributes, big hands, and big feet, the way that I’m built, proportion-wise, just made basketball the most inviting sport for me to play.” – Julius Erving

24. “The invention of basketball was not an accident. It was developed to meet a need. Those boys simply would not play ‘drop the handkerchief’.” – James Naismith

26. “Every memory I had growing up was involving a basketball. I didn’t go to the prom and stuff like that. It was always basketball for me.” – Kevin Durant

27. “The secret is to have eight great players and four others who will cheer like crazy.” – Jerry Tarkanian

28. “I can’t stand a ballplayer who plays in fear. Any fellow who has a good shot has got to take it and keep taking it. So he misses – so what?” – Red Auerbach

29. “Winning is about having the whole team on the same page.” – Bill Walton

30. “Everything negative pressure, challenges are all an opportunity for me to rise.” – Kobe Bryant

31. “I’ve never been afraid of big moments. I get butterflies… I get nervous and anxious, but I think those are all good signs that I’m ready for the moment.” – Stephen Curry

33. “Champions never complain, they are too busy getting better.” – John Wooden

34. “Sometimes a player’s greatest challenge is coming to grips with his role on the team.” – Scottie Pippen

35. “When you’re not practicing, someone else is getting better.” – Allen Iverson

38. “All the successful teams I’ve ever seen have three characteristics: they play unselfish, they play together, and they play hard.” – Larry Brown

40. “Great players are willing to give up their own personal achievement for the achievement of the group. It enhances everybody.” – Kareem Abdul Jabbar

41. “In order to achieve positive results, one must work for them, not hope for them.” – Bob Knight

42. “I always laugh when people ask me about rebounding techniques. I’ve got a technique. It’s called just go get ball.” – Charles Barkley

43. “Once you are labeled the best you want to stay up there, and you can’t do it by loafing around. If I don’t keep changing, I’m history.” – Larry Bird

44. “Push yourself again and again. Don’t give an inch until the final buzzer sounds.” – Larry Bird

46. “As a professional athlete a lot is going to be said about you but I just try to move forward and try to achieve my goals.” – LeBron James

49. “Every time I feel tired while I am exercising and training, I close my eyes to see that picture, to see that list with my name. This usually motivates me to work again.” – Michael Jordan

50. “Champions play as they practice. Create a consistency of excellence in all your habits.” – Mike Krzyzewski