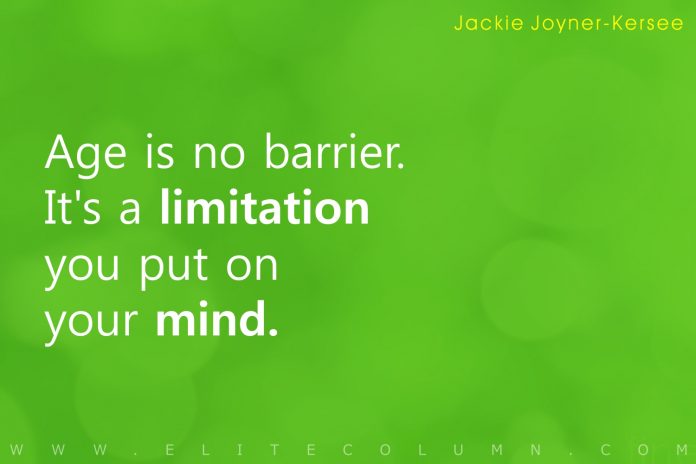 1. “Only he who can see the invisible can do the impossible.” – Frank L. Gaines

2. “The man who has no imagination has no wings.” – Muhammad Ali

5. “Age is no barrier. It’s a limitation you put on your mind.” – Jackie Joyner-Kersee

6. “The only way to prove that you’re a good sport is to lose.” – Ernie Banks

7. “I always felt that my greatest asset was not my physical ability, it was my mental ability.” – Bruce Jenner

8. “There may be people that have more talent than you, but there’s no excuse for anyone to work harder than you do.” – Derek Jeter

9. “One man practicing sportsmanship is far better than 50 preaching it.” – Knute Rockne

10. “Champions keep playing until they get it right.” – Billie Jean King

12. “Always make a total effort, even when the odds are against you.” – Arnold Palmer

13. “The more difficult the victory, the greater the happiness in winning.” – Pele

16. “An athlete cannot run with money in his pockets. He must run with hope in his heart and dreams in his head.” – Emil Zatopek

17. “You have to expect things of yourself before you can do them.” – Michael Jordan

18. “There are only two options regarding commitment. You’re either IN or you’re OUT. There is no such thing as life in-between.” – Pat Riley

19. “You were born to be a player. You were meant to be here. This moment is yours.” – Herb Brooks

20. “The key is not the will to win. Everybody has that. It is the will to prepare to win that is important.” – Bobby Knight

23. “If you are afraid of failure you don’t deserve to be successful!” – Charles Barkley

24. “Today I will do what others won’t, so tomorrow I can accomplish what others can’t.” – Jerry Rice

25. “You might not be able to outthink, out market or outspend your competition, but you can outwork them.” – Lou Holtz

26. “You have to do something in your life that is honorable and not cowardly if you are to live in peace with yourself.” – Larry Brown

29. “You can’t get much done in life if you only work on the days when you feel good.” – Jerry West

31. “It’s hard to beat a person who never gives up.”  “Heroes get remembered, but legends never die.” – Babe Ruth

33. “If you have everything under control, you’re not moving fast enough.” – Mario Andretti

34. “You can’t put a limit on anything. The more you dream, the farther you get.” – Michael Phelps

35. “Procrastination is one of the most common and deadliest of diseases and its toll on success and happiness is heavy.” – Wayne Gretzky

37. “Talent is God given. Be humble. Fame is man-given. Be grateful. Conceit is self-given. Be careful.” – John Wooden

38. “I hated every minute of training, but I said, ‘Don’t quit. Suffer now and live the rest of your life as a champion.’” – – Muhammad Ali

39. “What keeps me going is not winning, but the quest for reaching potential in myself as a coach and my kids as divers. It’s the pursuit of excellence.” – Ron O’Brien

40. “Gold medals aren’t really made of gold. They’re made of sweat, determination, and a hard-to-find alloy called guts.” – Dan Gable

41. “The highest compliment that you can pay me is to say that I work hard every day, that I never dog it.” – Wayne Gretzky

42. “Adversity causes some men to break; others to break records.” – William A. Ward

43. “Some people say I have attitude – maybe I do…but I think you have to. You have to believe in yourself when no one else does – that makes you a winner right there. ” – Venus Williams

44. “Pain is temporary. It may last a minute, or an hour, or a day, or a year, but eventually it will subside and something else will take its place. If I quit, however, it lasts forever.” – Lance Armstrong

45. “A champion needs a motivation above and beyond winning.” – Pat Riley

47. “Finding good players is easy. Getting them to play as a team is another story.” – Casey Stengel

52. “Do you know what my favorite part of the game is? The opportunity to play.” – Mike Singletary

53. “One man practicing sportsmanship is far better than 50 preaching it.” – Knute Rockne

54. “Winning isn’t everything, but wanting to win is.” – Vince Lombardi

55. “The difference between the impossible and the possible lies in a man’s determination.” – Tommy Lasorda

56. “The principle is competing against yourself. It’s about self-improvement, about being better than you were the day before.” – Steve Young

58. “Show me a gracious loser and I’ll show you a failure.” – Knute Rockne

59. “Winning isn’t everything, but it beats anything that comes in second.” – Paul Bryant

61. “Nothing is black-and-white, except for winning and losing, and maybe that’s why people gravitate to that so much.” – Steve Nash

66. “Competitive sports are played mainly on a five-and-a-half inch court, the space between your ears.” – Bobby Jones

67. “You can’t win unless you learn how to lose.” – Kareem Abdul-Jabbar

68. “An athlete cannot run with money in his pockets. He must run with hope in his heart and dreams in his head.” – Emil Zatopek

69. “At a young age winning is not the most important thing… the important thing is to develop creative and skilled players with good confidence.” – Arsene Wenger

71. “Passion first and everything will fall into place.” – Holly Holm

77. “My motto was always to keep swinging. Whether I was in a slump or feeling badly or having trouble off the field, the only thing to do was keep swinging.” – Hank Aaron

78. “To uncover your true potential you must first find your own limits and then you have to have the courage to blow past them.” – Picabo Street

82. “Obstacles don’t have to stop you. If you run into a wall, don’t turn around and give up. Figure out how to climb it, go through it, or work around it.” – Michael Jordan

84. “Just keep going. Everybody gets better if they keep at it.” – Ted Williams

85. “Push yourself again and again. Don’t give an inch until the final buzzer sounds.” – Larry Bird

86. “The will to win is important, but the will to prepare is vital.” – Joe Paterno

87. “Never let your head hang down. Never give up and sit down and grieve. Find another way.” – Satchel Paige

92. “Life is gonna throw you curve balls and it’s how you deal with them and your attitude and your work ethic.” – Kerri Strug

93. “So many people along the way, whatever it is you aspire to do, will tell you it can’t be done. But all it takes is imagination. You dream. You plan. You reach.” – Michael Phelps

95. “You’ll score a lot of goals in your career but not one of them will happen without the help of a teammate.” – Abby Wambach

97. “The most rewarding things you do in life are often the ones that look like they cannot be done.” – Arnold Palmer

99. “Some may have more talent than you, but there is no excuse for anyone working harder than you do.” – John Tavares

101. “To me the beauty of teamwork is the beauty of our sport, where you have five acting as one. You become selfless.” – Coach Mike Krzyzewski

102. “Winning is the most important thing in my life, after breathing. Breathing first, winning next.” – George Steinbrenner

107. “What makes something special is not just what you have to gain, but what you feel there is to lose.” – Andre Agassi

108. “Pressure is a word that is misused in our vocabulary. When you start thinking of pressure, it’s because you’ve started to think of failure.” – Tommy Lasorda

109. “Believe me, the reward is not so great without the struggle.” – Wilma Rudolph

110. “I am a member of a team, and I rely on the team, I defer to it and sacrifice for it, because the team, not the individual, is the ultimate champion.” – Mia Hamm

111. “I am no genius; I just worked hard like my other teammates, and I believe all my teammates can win the title as they work hard, too.” – Lin Dan

112. “You’ve got to be very careful if you don’t know where you are going, because you might not get there.” – Yogi Berra

113. “Kill them with success and bury them with a smile.” – Usain Bolt

115. “I’ve had to learn to fight all my life – got to learn to keep smiling. If you smile things will work out.” – Serena Williams

118. “I would have thought that the knowledge that you are going to be leapt upon by half-a-dozen congratulatory, but sweaty team-mates would be inducement not to score a goal.” – Arthur Marshall

119. “In baseball and in business, there are three types of people. Those who make it happen, those who watch it happen, and those who wonder what happened.” – Tommy Lasorda

121. “You are the handicap you must face. You are the one who must choose your place.” – James Lane Allen

122. “It isn’t the mountains ahead to climb that wear you out; it’s the pebble in your shoe.” – Muhammad Ali

123. “Goals prepare Olympic athletes physically and mentally. Did you know that goals are used by sports psychologists in order to help athletes improve their performance?” – Paul Bailey

124. “Bodybuilding is much like any other sport. To be successful, you must dedicate yourself 100% to your training, diet and mental approach.” – Arnold Schwarzenegger

125. “In sports, players need to be reminded of their competition to become motivated to practice. The same can be applied in business.” – Gavin McGinnis

127. “I’ve always made a total effort, even when the odds seemed entirely against me. I never quit trying; I never felt that I didn’t have a chance to win.” – Arnold Palmer

128. “Winning means you’re willing to go longer, work harder, and give more than anyone else.” – Vince Lombardo

129. “Every champion was once a contender that refused to give up.” – Rocky Balboa

130. “At one point in your life you either have the thing you want or the reasons why you don’t.” – Andy Roddick

131. “It never gets easier. You just get better.” – Jordan Hoechlin

134. “Champions aren’t made in the gyms. Champions are made from something they have deep inside them – a desire, a dream, a vision.” – Muhammad Ali

137. “Ability may get you to the top, but it takes character to keep you there.” – John Wooden

138. “The best motivation always comes from within.” – Michael Johnson

139. “The secret of winning football games is working more as a team, less as individuals. I play not my 11 best, but my best 11.” – Knute Rockne

142. “Difficulties in life are intended to make us better, not bitter.” – Dan Reeves

143. “The rewards are going to come, but my happiness is just loving the sport and having fun performing.” – Jackie Joyner Kersee

146. “Wisdom is always an overmatch for strength.” – Phil Jackson

148. “Never underestimate the heart of a champion!” – Doc Rivers

149. “If you don’t fall, how are you going to know what getting up feels like?” – Stephen Curry

150. “We old athletes carry the disfigurements and markings of contests remembered only by us and no one else. Nothing is more lost than a forgotten game.” – Pat Conroy

151. “Winning is a habit leadership is calmly maintaining that habit against all odds.” – Amit Ray

153. “You will never get the best out of anyone professionally unless you understand what motivates and makes them tick personally as a human being.” – Rasheed Ogunlaru

154. “Nothing else will show your true character than how you lose.” – Ken Gleed

155. “Success is where preparation and opportunity meet.” – Bobby Unser

Thanks for checking out the best Athlete Quotes. Feel free to share the quotes with your friends. Leave a comment below and which are your favourite Athlete Quotes ?