Pearl Jam is an American rock band whose line up consists of Eddie Vedder, Mike McCready, Stone Gossard and Jeff Amend. Till date, the band has sold approximately 32 million records in the United States. They released their first album ‘Ten’ in 1991 just as grunge genre of music was starting to take off. It went on to achieve Diamond status in the US and spawned numerous hits such as ‘Alive’, ‘Black’ and ‘Jeremy’. As the band’s success grew rapidly, they rejected the mainstream attention they were receiving. With the release of ‘Vitalogy’, they became more famous and experimental with their music. In 2009, the band would follow up with Backspacer which became another success that spawned the new-wave inspired acoustic ‘Just Breathe’. EliteColumn brings you the ten best Pearl Jam quotes to make your life beautiful. 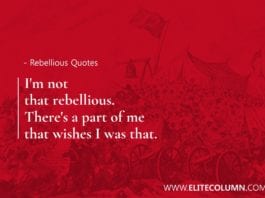 12 Best Rebellious Quotes To Provoke The Inner Beast In You

9 Christopher Poindexter Quotes To Make Your Unrequited Love a Success